Soo Smart: Five minute “All About Me” Talk

For the serious stuff, go here> 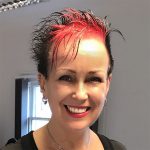 Soo Smart – Yes that really IS my name! I’ve had it since 1981.
I come from an artistic, musical family, we can all draw or create something with our hands. My gran and mum used to work in Nottingham Lace factories and my dad worked for the Ordnance Survey, drawing out maps. My gran could play the violin and piano and one of my uncles could play any instrument he put his hands on.

Please contact me on 01473 487699 if you want to talk through potential design projects, websites or branding. Otherwise, you can contact me by filling in this form>

My favourite subjects at school were Art and PE, but Gymnastics was my thing! I belonged to Sudbury Gym Club and won a bronze medal for the floor for the East of England, and then went to the national gymnastics competition in Halifax when I was 16. I would be in school plays from primary school days, and be in school music ensembles and bands. Somehow I would get the lead part – I suppose if they wanted someone to do cartwheels or stand on someone’s shoulders to say their lines, they picked me!

After A levels and Art College where I could do Art ALL DAY EVERY DAY, I worked in London doing Animation, I worked on Adverts and films – things like The Snowman, Kellogg’s Frosties and a music video for Iron Maiden, it was a bit scary drawing Eddie the Head throughout the night.

I love music and the first festival I went to was Womad in 1990 when the boys were quite small – 6 and 4.

I worked at GRE in the design studio and later went on to manage it until end of 1999 when AXA bought GRE and the design studio was made redundant. Since then I have worked in London and Ipswich (where I got made redundant again from Health Media where I did web design). I decided I could run a business better than these blokes and started my own company in 2002 using the skills I’d gained at GRE and Health Media.

In 2003 I was asked to give a presentation to students at Colchester institute on the subject of running a design business, and from that got asked to teach web design and graphic design on the BTEC National Diploma course. I did this for 9 years.

I’ve been to Glastonbury twice and Womad for the last 10 years running, I just love music and camping, in fact, just recently I’ve started singing – following in the footsteps of my mum, uncle and gran. Bringing us full circle, back to them. They say women get like their mothers, and it’s true! In fact, I’m probably getting like my gran and as she lived to be nearly 100, I won’t complain.

Married to Phil, we enjoy holidays usually by train to European cities. We particularly liked the east German fairy tale towns such as Wenigerode with its castle on the hill and nearby woodland that must have inspired the story of Hansel and Gretel.

APPENDIX:
I’ve been Soo since I was 12 and Soo Smart when I got married. Now, if I’d known that people would post stuff about their dog/cat/baby being soo smart and clever, I would have patented my name. In fact Facebook blocked me as they thought I was fake, that my name was fake. It’s lovely that everyone I knew on Facebook were up in arms to defend me, and finally I was able to get my proper name reinstated. By Deed Poll my official name is now Susan Soo Smart, for which I use my middle name ‘Soo’ – again, same as my mother and my grandmother.